The #MeToo police has arrived 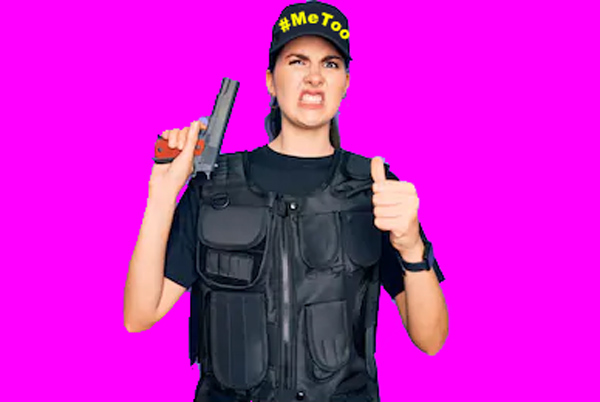 Did you know that a uniformed #MeToo police has been established in Denmark?

No, neither did I, but there she stood in the entrance to the fitness center wearing her #MeToo uniform while glaring around the room. All men bowed their faces in shame.

A terrible feeling of guilt rushed through my body and mind. "Gosh, what have I done wrong", I thought? Did I happen to touch a woman's thigh while sitting down in the bus? Was it that woman whom I had dotted in the crowded and noisy bar in an attempt to get around and who had turned and yelled something at me? Was it that time when I walked down a street behind a woman and I could not control staring at her beautiful, rocking behind and she had turned and looked at me, angrily? How the heck could she know? Or was it that time in a party when I had flushed and looked down in embarrasment because a knaughty fantasy had popped into my mind? Had a woman managed to read my mind? Certainly, I had to be guilty of something. My eyes met those of the other men: "Was it you?"

Well, when I polished my glasses, it turned out, her uniform did not read "#MeToo", but "Netto", the name of a Danish Supermarket.